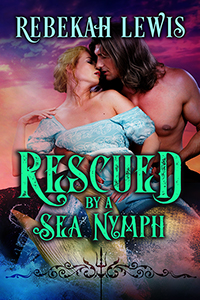 Is it love at first sight, or a gamble of fate?

Captain James Harlow, third son of a viscount, expects nothing from life and yearns for adventure. He gets his wish when he’s overcome by a group of young miscreants with ties to the peerage, losing his hand in the encounter…and nearly his life. If not for a mysterious mermaid who emerges from the depths to save him.

Ione isn’t like the other Nereids. Her scales and hair aren’t as bold in color, and she has no desire to drown the mortals she mates with. So when a handsome mortal is left to die in the sea before her eyes, she can’t stop herself from saving him—and trading her fins for legs to follow him on land.

With only three days to determine if they belong together, the pair are caught in the midst of a sociopath’s schemes to tear James’ life asunder.  But can the young earl be stopped before he harms anyone else?

The mortal, a male, continued to sink, barely moving an arm or leg, to kick back toward the surface or the boat, which was rowing away from him as if they hadn’t noticed his departure at all. She gasped. Gods, he was drowning! Had his companions left him to die on purpose? Why would they do that?

Before she had decided to do anything, she kicked her tail at a rapid pace, gliding upward until she’d caught the man under his arms. Both the instinct to protect the human and the secret of her kind from others like him had her at odds, and Ione rushed with him in the opposite direction of the boat. It helped that the night sky obscured as much as the moonlight revealed. She’d always been fascinated by the glow of moonlight—but now was not the time to marvel in such things.

When she brought his head above the waves, he wasn’t breathing. Fearing she’d kept him under too long, she repositioned him onto one of her arms and placed her hand on his chest, over his heart, then slipped her palm under the loose material of his clothing. His flesh was cold to her touch, possibly from the water’s temperature and not because she was too late. Channeling energy into her hand, she lowered her lips to his, willing the water he had inhaled to come back to her. To exit his body. When saltwater met her lips, she pulled back as he coughed and spat the water out of his system.

Ione looked at him then, and admired his masculine beauty. Dark hair had come loose from the tie that still held a portion of it back at the nape of his neck. His eyes were blue—detectable due to her enhanced senses required for life beneath the surface. He had a square set to his jaw, and a pleasant facial structure. As he stared at her, he blinked, almost as if he were in disbelief. Then he winced.

“I must say,” he gritted out in a deep voice that made her shiver, “I expected heaven to be less…wet.” And with that, his eyes rolled back and he lost consciousness.

Humans were so fragile.

With a sigh, she kept hold of him and swam in the direction of shore. She could faintly make out a beach in the distance, and hopefully the night would offer them enough privacy that her being above the surface wouldn’t endanger her or her people. Either way, the thrill of adventure called to her. And her desire to mate hummed in her veins.