It has been extremely crazy for this author so far this year. Work tried to kill me. Edits tried to bury me. And my writing, well…I am not as far ahead of the game as I’d like to be this year, but I got a good bit done. It’s been exciting as far as new releases go so far. WSN went to print in January and Ravaged: Vol 2 released the same month. UtSM released in April and…..

IT WILL BE IN PRINT IN TWO WEEKS!

*cough* yes. Under the Satyr Moon didn’t have to wait a year like Pan did, it is already going to print. I am really excited about it. I may pet my copy creepily while cackling like the wicked witch. On July 11 it will be available in print for everyone to fondle…er…read. While I am still writing away on Melancton’s book, there will be some goodies to sink your teeth into in the mean time.

Next up is a short story (8500ish words long, very short and to the point) called “The 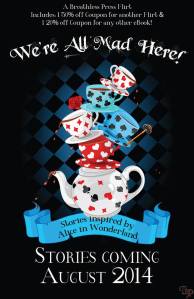 Vanishing.” It is based off Alice’s Adventures in Wonderland, Through the Looking Glass, and “The Hunting of the Snark,” all frabjous works by Lewis Carroll. I can’t give you many deets on it just yet, but I will say the Cheshire cat, Red Queen and Hatter all make appearances. However, the H/h are mostly original. Though the hero was mentioned in Through the Looking Glass…sorta. This one is a sweet romance rather than the steamy material you are used to with the satyrs. I am really excited about it though as the Wonderland stories are favorites of mine, and those of you who know me personally know I collect Cheshire cats and Wonderland stuff like it is going out of style. Seriously, one day I will be the basis for a Wonderland episode of Hoarders (hopefully it doesn’t get to that point…)

Anyway, “The Vanishing” is one of many short stories (BP calls them Flirts) based on Wonderland that are coming out in August to celebrate the 5th Anniversary of Breathless Press. Expect a big surprise regarding the Wonderland stories to be announced later. *wink wink*

The first novella in the Adventures of Hermes series was submitted to my editor this month.  It is one of three parts that follow everyone’s favorite Olympian as he reconnects 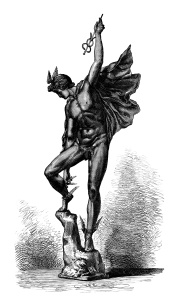 with his former flame, Hybris, and acts as a companion series to the Cursed Satyroi. It can be read on its own, but does contain spoilers to the Satyroi novels and does overlap scenes in the series through different POVs. One scene from Melancton’s book in particular will be seen in a completely different light in the Hermes novella, and no I will not elaborate on that. 😉

I am hoping I can get that to you all in December, but it all comes down to the publisher. *crossing fingers I have news to share soon*

And that’s it for now. I am off to get promo material for the print copy of Under the Satyr Moon to my publisher, but I hope everyone has a great week and a fantastic summer!