Sometimes it takes something simple and as natural as snow to put life into perspective for you.

I’ll preface this post by stating that it snowed today in Savannah, Georgia. It was the first time I’ve seen snow how it should be–a statement which is both factual and false in that I was born in North Carolina and the baby pictures prove my 3-4 month baby eyes saw snow (of which I don’t remember) and when it snowed here in the 80s, we were living in southern Florida and had traveled up to see my grandparents. Since I was very young the only thing I recall out of the ordinary of that trip was that we had flown up here and I remember the plane. I remember my mom pointing out the window as we crossed over Jacksonville and saying that’s where my Aunt and Uncle and cousins lived. But I don’t remember snow. And I don’t remember much else about that trip. It’s also a false statement in that it has snowed in Savannah since I’ve lived here (we moved here in 1992 after Hurricane Andrew wrecked our home in Homestead). However, those few times it has snowed, the flurries lasted either mere minutes or a couple hours, sticking only to cars and roofs and melting everywhere else. It’s stuck to the ground in surrounding areas but not here. But finally, at long last, we got a good 3-4 inch snow fall today. 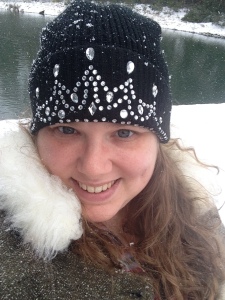 There’s not a whole lot of exciting “firsts” you can get into your thirties. I’ve always wanted to experience snow properly, and though this snowfall was light compared to northern states and other countries, it was exciting and new to me, and I could not stop grinning. The phrase kid on Christmas morning was exactly how I felt. And while we had been forewarned of this weather heading our way for a week now, I had doubts. Last winter it was supposed to snow and we only got some ice and rain. The actual snow falling just to our north and our west. Being so close to the coast as we are, we’re more prone to ice than actual snow.

However, the snow arrived in the mist of frozen rain. I can’t tell you how many times I got up from my chair to go stare out the window, waiting and watching for the snow to start and then suddenly an accumulation appeared on the rooftops, and shortly after on the ground around the buildings. Within an hour, the landscape was blanketed and snow continued for a good 3-4 hours on and off. I took great pleasure in rushing outside for the obligatory snow selfie for social media (or several because you know it takes about 20 tries for 1-2 decent photos because you never like how you look! lol!) I even at one point scooped up a tupperware bowl of snow off the hood of my car to empty on the porch for Bagheera, my cat, to investigate. It took building a tiny snow man in it for her to get over her anxiety and check it out. She was fine with the cold, and with the snowman, but as soon as her little paw met with the cold, wet snow…she was DONE. She went nope, nope, nope back into the apartment leaving a single paw print behind as proof that she tried. lol

Meanwhile, every time I went down the stairs and outside, I was on sensory overload. There were times I didn’t even notice the cold (I hate being cold). I didn’t really care that all the other neighbors that were outside doing the same thing I was (I have social anxiety). In fact, I saw more people from my complex out in a single day that I have ever seen at one time in the 5 years I have lived here. Parents had their children outside playing. Dogs were walked more frequently than usual. People were taking selfies for themselves or photos of family members. Some simply sat or stood on their porch and enjoyed the beauty of the day.

And that’s what it was. A beautiful day.

Sure, it started off gloomy and gray and wet and frozen, but as the landscape and air became bright and monochromatic there was a sense of awesome tranquility that just took over. This is a frequent, common act of nature that people in my city don’t get to witness. I could understand how living with months of this, in heavier portions, could be challenging and irksome. But we only had a day (maybe two. It may or may not be *completely* gone in the

morning.) I couldn’t get over the tickle of snowflakes against my cheeks. The crunch and squish of walking over the snow itself. I had a very, *very* strange satisfaction whenever my boots sank into more than an inch of it. In one place, because the grass was tall and it had only blanketed the top, the snow covered my feet entirely. I walked in circles in that area after that. I made a snowball and threw it against a tree to the immense satisfaction of it bursting and leaving a mark on the tree. I spied a snow angle made in the handicap parking space and giggled at the sight. I laid in my floor with my glass door wide open and a cat staring over my shoulder as I took off my gloves and made a small snowman with button eyes and bobby pin arms just so my cat would feel comfortable exploring the strange substance she’d watched dropping from the sky the entire afternoon. I felt sadness when cars–of those who still had to work today regardless of most businesses and roads (and all the schools) being closed–started coming through the roads and melting the snow, leaving icy, dirty sludge for the roads that were earlier soft and snowy and unmarked by even footprints.

I had a weird moment of clarity where this natural beauty of the world was coming and going withing a day’s time. I saw it, I enjoyed it, I held it in my hands, but was incapable of making it stick around longer. It made me consider how life and all the people in it, itself, is one longer snow day that gets taken for granted because after a while it loses it’s appeal and beauty and becomes bothersome. We take the things that life gives us for granted so easily and so often that we can’t appreciate the good things and only focus on the bad.

2017 was one of the worst years of my adult life. It had good moments, but they were overshadowed by bad. During the Christmas holidays I wondered if 2018 would be better, and hoped it could. Despite the fact that my life is in my control. If I want change, I need to be the one to make them. They won’t happen on their own. And then merely 3 days into the brand new year…a snow day.

Happy 2018 to all my readers. Find your snow day, even if it isn’t involving snow. Live life for you.